Stay out of the System: a sobering admonition imploring those who have suffered injustice to avoid at all costs seeking the assistance of police, courts, or government agencies.

As a lawyer widely believed to be unafraid of the government, I am frequently consulted by people who have gotten themselves deeply involved in disputes with local, state, or federal agencies. By the time they get to me most of these folks have already spent lots of time, money, and sleepless nights, and a few have broken bones. It is depressing to have to report that most of these potential clients were not targeted by Big Brother because their high native intelligence was deemed a threat to the bureaucracy. No, most of them targeted themselves by asking the government for help.

Take my friend who wanted some advice on getting rid of some solvent in the bottom of a fifty-five gallon drum left behind by his deceased father. The drum had begun to leak a few drops, and he called the fire department to see if they would take it away or tell him who would. They kindly said they would send someone by with a special case for the drum, charging for the case and for delivery, of course. That was okay, although if they would have divulged the fact that he could have gone out and bought one of those cases himself, saving the delivery charge, he would have done so, and could then have explored what to do with the whole package at his leisure.

Now my friend is just getting over being a nervous wreck for weeks because of the light-flashing, siren-blowing, FOURTEEN FIRE TRUCKS that showed up and blocked traffic to deliver the special case. It wasn’t the huge bill the fire department proposed to collect that drove my buddy bats. It wasn’t the suspicions of his neighbors about what strange thing could have brought that many fire trucks to a house with no fire. It wasn’t the fact that the fire department explained its overkill response by falsely claiming that my friend had made a hazardous substance call to its emergency “911” number, when he had intentionally created the least possible alarm by contacting the department through its business number. He kept his sense of humor about all of these things, saying to the chief, “Hey, maybe an ounce got out. Where’s the helicopter?” What got my pal’s brains rattling was that the department had sent more trucks to deliver his special case than it had sent to fight the raging inferno of a real fire that had flattened his favorite bar (twelve).

A lot of people who believe they have been victims of false arrest or excessive force at the hands of the police come to see me, seeking justice, or, failing that, cash. I have come to cringe when I ask the inevitable question, “Who called the cops?” So very often the answer is, “I did”.

A person who gets into an intractable dispute with a lover, a merchant, a landlord, or a neighbor is often tempted to call the police for assistance in working out a solution. Most just want a neutral authority figure to tell an adversary that he is in the wrong. The truly self-righteous may actually want someone arrested. These folks all believed that the policeman was their friend, and they all came to see me because they wound up in handcuffs in the back seat of a squad car heading for the basement of the jail. Increasingly, police are encouraged to resolve disputes to which they are summoned by arresting someone, and having been the one who called 911 confers no immunity against arrest. And isn’t it obvious that when the police are summoned to a landlord-tenant shouting match, the tenant is far more likely to be the one with a free ride uptown, whatever the facts? Can’t we get it through our skulls that when the cops are called in to judge a merchant-consumer tug-of-war over the shirt the customer wore into the store, they aren’t going to award the silver bracelets to Mr. Whipple? Apparently not, judging by the constant stream of indignant arrestees clogging my waiting room. The day when a little guy could call a cop over to resolve a dispute with a bigger guy, and see the cop resolve it and go on his way whistling a merry tune is past, if it was ever here. 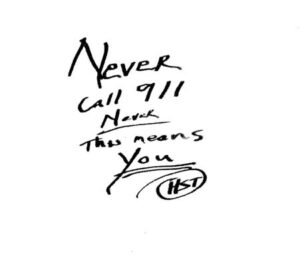 But what if it’s two little guys, or two little gals, looking for a referee? The fascinating truth is that there seems to be a lightning-rod effect associated with making the 911 call. Other things being even loosely equal, in a situation where no one should be arrested — meaning no one is in imminent danger of being sliced and diced — the one who calls the cops is the one most likely to be collared. If we learned from our experiences this effect would clamp an inertial damping field on our tendency to make ill-advised leaps into the criminal justice system, but we don’t.

About the only thing which demonstrates less mental firepower than calling on the authorities for assistance in the first place is attracting their attention after they arrive. For some reason, though, it is the same people who tend to summon the minions of our police state who tend to feel that their day hasn’t been worth living unless they loudly assert their view of things to someone who could care less, like, typically, a beat patrol officer. These are the same troublesome grown-up Hitler youth who feel they have to complain to the poor waitress about some aspect of a restaurant meal, even when there is absolutely nothing wrong, every single time. Suffice it to say that if waitresses could write citations, these folks would be leaving with sheafs of them. In my experience, arguing with representatives of the government or complaining about the way they are doing their jobs has the potential to turn an unbearable situation into a real fourteen-alarm disaster.

In the modern world, very little of this is what you could call the fault of the cops. They go to work every day knowing they can be called on to act quickly in life-or-death situations. Of the two kinds of mistakes they can make – treating silly situations seriously and treating really serious situations too lightly – they try to avoid the second kind because arrested people can be let go but dead people can’t be arrested. And, given the crime level, it is hard to blame them for assuming that no one would have called the cops unless someone really needed to be arrested right now to save life or limb. My considered professional opinion is that everyone should avoid invoking the assistance of any governmental agency at all costs. Even asking the tax people for assistance on a form might lead to an audit. Get private help.

Stay out of the System: Never rely on a government agency of any kind to react proportionately, to be able to figure out that you are telling the truth and someone else is lying, or to give you the sort of assistance you ask for. If you have to get into the system, keep your mouth shut, hold your temper, and get out as quickly and quietly as you can. Don’t demand justice or you just might get a knuckle sandwich and a big bill for extra mayo.